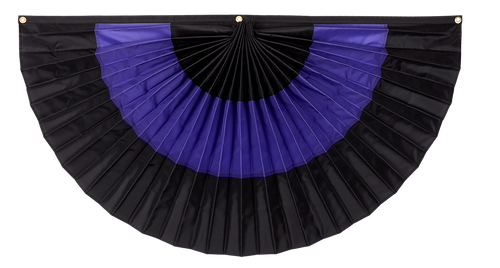 UPC:
Weight:
0.20 LBS
Shipping:
Calculated at Checkout
1):
Double Stitched stripes, not merely printed.
2):
Made with industry leading heavy weight poly cotton fabric
3):
3 rust-proof grommets on header for easy hanging.
4):
Only Fans with real pleating so they can be used over and over, always looking like new.
5):
Folds back into original pleats for easy storage. Never needs ironing!
6):
12" x 24" means it is 24" (2 Feet) across the top & drops down 12" (1 Foot)

Each flag bunting comes in an industry best heavy weight poly-cotton material. Stripes are fully sewn with double stitched hems, not printed. These are great for hanging both indoors and outdoors.

Each Pleated Fan has 3 grommets for easy hanging, and quickly folds back into its original pleats for storage, without the wrinkles.