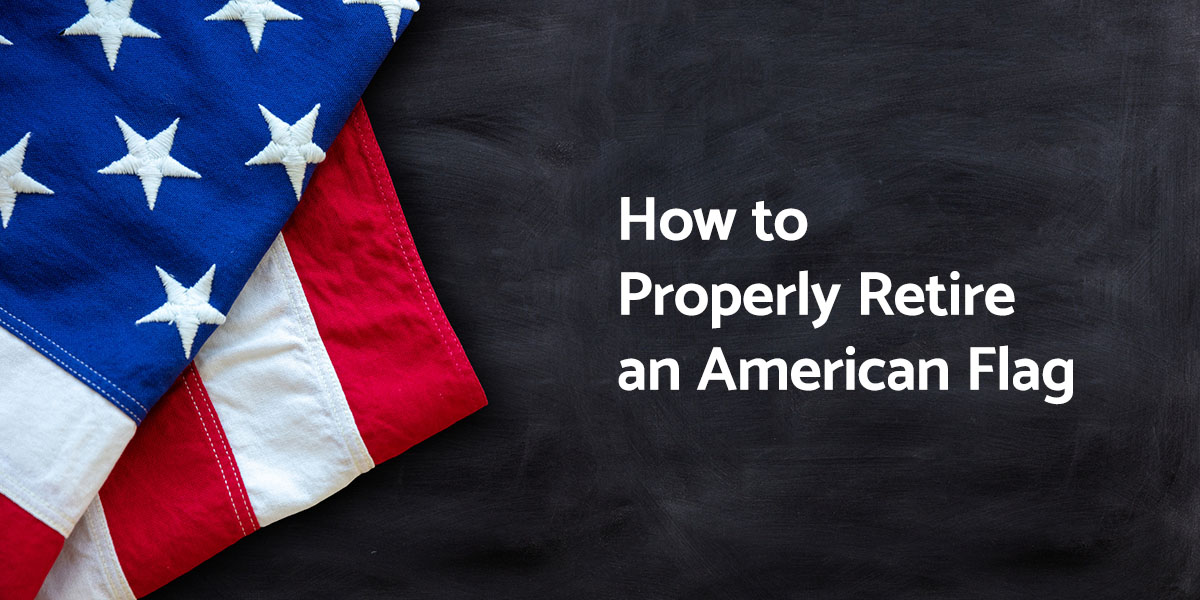 Whether you hang an American flag outside your house year-round or break it out for patriotic holidays like the Fourth of July and Memorial Day, you might have wondered how to retire a flag once it's old. Flag retirement refers to the respectful disposal of the American flag appropriately. It involves destroying the flag in a small ceremony that reflects its importance to the United States.

The U.S. flag represents our great nation and its long-standing principles — it symbolizes the country's united history, pride and achievements. It brings the entire nation together as a community under one banner. Displaying the American flag correctly shows respect for this symbol and the country it represents. Similarly, knowing how to retire a flag also demonstrates its importance as a symbol of America.

The U.S. Flag Code Title Four, Section 8 states that the flag should be destroyed "in a dignified way, preferably by burning" when it is no longer in good display condition. Once your flag is no longer fit for display, you'll want to retire it. There are no restrictions on who can retire a flag — anyone with an American flag can dispose of it when the time comes. If you've ever wondered how to retire an American flag, check out this guide to learn more about the acceptable ways to dispose of your flag.

When Should You Retire an American Flag?

The right time to retire your flag is up to you. Generally, flag retirement occurs when a flag has become faded or tattered. There are ways to prolong the life of your flag, like gentle washing, to help keep it in good condition for longer.

To clean your flag when it gets dirty, use cold water and a mild detergent to clean the fabric. Then, simply hang it to dry. If your flag is old, faded or tattered to the point it's visibly damaged and worn, it might be time to retire it.

While materials like nylon or polyester are built to withstand harsher weather and exposure, some materials won't stand up to the outdoors as long. Depending on where you live and what conditions your flag experiences, it might become damaged more quickly than others. Regularly maintain and care for your flag to keep it in good condition for as long as possible.

Where to Take Your American Flag for Proper Disposal

The preferred proper disposal of an American flag is by burning it. However, you can also bury your flag or send it to a group that will properly dispose of it if you are unable to. If burning is not an option in your area or if your flag is made of materials that might harm the environment, there are other ways to retire your flag respectfully.

Sometimes, you might not want to burn, bury or donate your flag. Many flags often have personal histories behind them that would make you want to preserve them. If this is the case, you can carefully fold the flag in the traditional manner and place it in a protective, sealed container or display case for preservation. 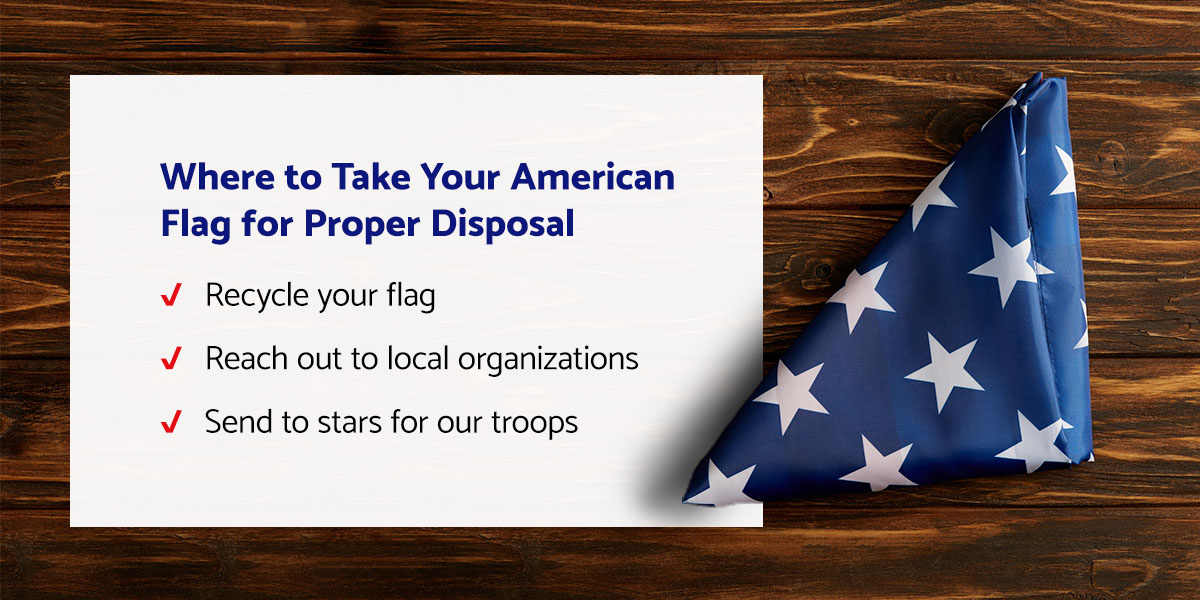 Some companies and communities have American flag recycling programs. Reach out to one of these online groups or your local community to get your flag properly recycled. Do thorough research to ensure your flag is recyclable and that the group will do so correctly. Flags made from nylon can often be recycled into new American flags.

Reach Out to Local Organizations

Many organizations offer flag retiring services. Groups like Elks Lodge, Veterans of Foreign Wars (VFW), the American Legion, the Boy Scouts of America and Girl Scouts of the USA have flag retirement services. These groups are familiar with flag retirement requirements and will hold ceremonies to dispose of flags turned into their organization correctly. The United States Post Office will also take old American flags and dispose of them for you. Simply drop your flag off during business hours.

Send to Stars for our Troops

The Stars for our Troops volunteers take old American flags and send their stars to veterans, first responders and American soldiers overseas and on base. The group accepts 3-by-5 American-made flags with embroidered stars. They properly dispose of the remaining stripes and send the stars to the receiving American with a small card.

How to Burn an American Flag Properly

Understanding proper American flag etiquette will help you respect and display your flag in a manner that reflects the dignity and history of the United States. The preferred and most common way to retire an American flag is through a burning ceremony. Before performing this ceremony, check your local fire ordinances and flag material. If the material can be burned and your area allows it, you can burn your flag according to local policies.

While there is no specific manner of flag folding in the U.S. Flag Code, there is a customary folding manner often used in flag ceremonies. While you're folding the flag, it should never touch the ground. At the end of the folding, the flag should be in a triangle with the blue union section visible.

After folding the flag, start a fire large enough to burn the flag completely. Carefully place the flag into the fire. While the flag burns, salute the flag or recite the Pledge of Allegiance. Conclude the ceremony with a respectful moment of silence. Once the flag is completely burned, gather the ashes and bury them.

How to Bury an American Flag Properly

If you cannot burn the flag due to local ordinances or simply feel uncomfortable performing the ceremony, you can bury it. To correctly bury the American flag, fold it into the traditional triangle. Then, carefully place the flag inside a wooden box. Bury the flag and cover it completely, then hold a moment of silence in respect. 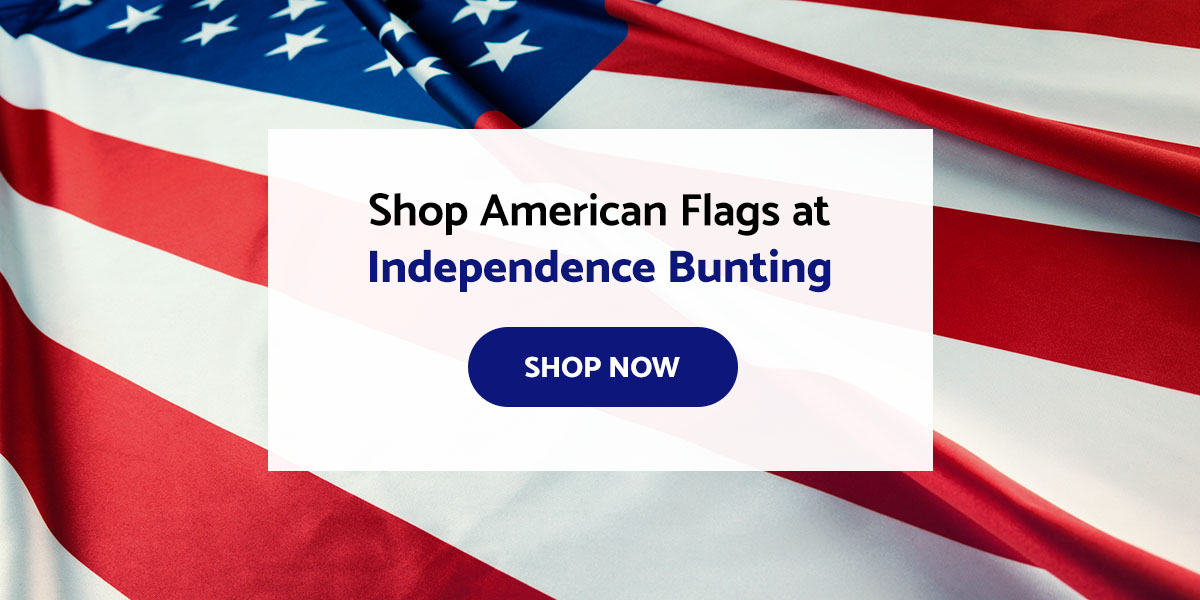 At Independence Bunting, we pride ourselves on delivering high-quality, patriotic flags for our customers. Our American flags are made of durable, weather-resistant materials to ensure you receive a flag you're proud to support America with. We offer different size and material options, letting you choose the flag that best suits your needs.

As a producer of American flags, we are dedicated to promoting and supporting American businesses and workers, which is why all our flags are made in the United States. Our flags are resistant to UV rays and color bleeding to give you a bright, sturdy flag for your patriotic display. If you're interested in purchasing a flag, explore our premium U.S. outdoor flags today!