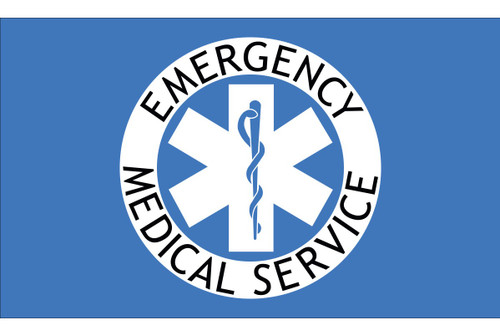 
Independence Bunting not only provides a wide range of United States Flags and U.S. Military Flags but also provides nearly a dozen different police flags, firefighter flags, and emergency services flags. These flags, unlike festive flags, are both practical and decorative. They are used to either commemorate a special occasion or clearly denote which services are provided.
Our 3' x 5' Civilian Service Flags
are manufactured in America using SolarMax 200 Denier 100% Nylon fabric. SolarMax fabric is tough, durable, long-lasting and specifically designed for active outdoor use. You will reap the benefits of low maintenance due to the high resistance to UV fading and colorfastness from rain.
Each flag has a canvas header with 2 rustproof brass grommets and clean finish hems on all sides with 4 rows of stitching on the fly ends.
Police Mourning Flags
Independence Bunting offers two different police flag options to choose from. These flags are mourning flags, made to commemorate the loss of an officer and express condolences to the family and friends of a fallen policeman or woman. Each flag has a dark blue and black stripe on either side, with a large white stripe down the middle; however, the symbol in the center of each flag is different.
Firefighters Flags
There are six different Firefighter flags to choose from. Three of these are plain red with a symbol in the center. There is also a fire rescue flag that is white with the fire rescue symbol in the center and a fireman remembrance flag to commemorate those who have given their lives saving others. The remembrance flag has a red and black stripe and a symbol in the center.
Emergency Services
Emergency service flags denote the presence of emergency medical services in the area. Independence Bunting has two flags of this nature. One is the Star of Life flag and the other is an Emergency Medical Service flag. The latter flag is light blue with the Emergency Medical Service emblem clearly displayed in the center.
While all of these flags are made in the same size and using the same material, Independence Bunting can also customize decorations and flags as need be. While each one of these flags is unique, they all serve the common purpose of giving honor and respect to those who serve the community. Prices vary but none of the flags are very expensive, and all flags are shipped in a timely and cost efficient manner.